1. Would you tell me the process of your paintings and how you see them existing in the world?

The paintings are made with acrylic and spray paint, wet over wet to create layers that can be peeled or sliced. Because the process is quite physical and the illusionistic space within the paintings is restricted, I want them to feel somewhat like objects rather than windows onto another world. However, there is enough ambiguity in the scale of the forms depicted that the paintings have a pictorial space separate from the one they inhabit as objects.

2. Your work seems to have changed significantly just in the last year. How do you view the work at SooVAC in terms of representation and abstraction?

I’ve been oscillating between abstraction and figuration for a number of years. Having just completed a body of figurative painting for my show at the Groveland Gallery last year, it felt right to do something different. Both sides of my work inform each other, and ultimately they are both forms of representation. There are received and invented forms in both, and the tension that exists between them is the place I try to operate as an artist. Whatever the subject matter, painting is essentially abstract; it’s simply a question of emphasis or the baggage one brings as a viewer that decides the way in which a painting can be read.


3. How do you come up with inspiration/ideas/concepts for your work?

I try not to make anything with a preconceived idea or concept. I have many sketchbooks that provide the fuel for a lot of my work, I take photos and look around me; this is the visual nourishment I need. I need forms for my imagination to feed on, and the ideas I pursue develop from the process of making.

I work in my garage, which I converted to a studio a few years ago. Generally, it feels too small and too dark, but it’s convenient. I’m always grateful that I can duck out of the house and work when time allows. This sometimes means before my children get up, or after they go to bed. Once I’m in the studio, I listen to music, drink coffee and stare at the work, breaking this routine up with bouts of frantic painting.

5. What are some distractions in your studio?

I try to keep those out. Besides, there’s no room.

6. When do you consider work finished? Is there a planned outcome?

Completing a work is difficult; it can happen quickly or it can take months. Sometimes it never happens. I paint in order to avoid plans, and I’ve become skeptical of outcomes that can be predicted in advance. Completing a work is usually a surprise, and occurs when the work refuses any further discussion. If it’s a successful outcome, I immediately don’t know how I arrived at the
solution.

7. You seem to be exploring a new process, could you take me through how these paintings have come to be?

I’ve been experimenting with what acrylic and spray paint can do for some time, trying to find a way these materials can keep the qualities that make them so distinct from oil paint; I wanted to exploit their synthetic character, using it to make surfaces that are simultaneously graphic and unstable. I’ve been pouring liquid acrylic over panels, then spray painting over that; the spray paint dries quickly while the paint beneath remains wet. This means the upper layer can be cut into and peeled away. When hung on a wall, the remaining shapes slowly migrate towards the ground, buckling the surface and rearranging the composition in unpredictable ways. All these states of matter and movement felt like rich metaphors to me.

8. What is the reason and significance of reducing your color palette?

I love color, and have always been obsessed with its interaction in painting. I eschewed it for this work as part of the process of letting go, stripping down and distilling. An earlier work in the show (‘Untitled’) uses grey, as well as whites of different temperature, and allows for an atmosphere within the space. I eventually rejected this direction as I wanted all forms to feel more compressed, and the unequivocal contrast between black and white provided that.

9. Has the interplay between your work and Mike Calway-Fagen’s work affected how your view your work? What do you think of this juxtaposition?

Mike’s work deals with direct and somewhat unpredictable interactions between him, his work and the world it occupies. There’s an unmediated quality to it that cuts through aesthetic consideration in a way, although I think it’s highly visual. I think there are strong parallels between the intentional and accidental aspects of my work and, say, a pile of scrap that’s been documented and reconstructed. I want some of the paintings to feel as though I’ve vandalized a perfectly good painting underneath, which never occurred to me until I saw my work next to Mike’s.

10. Does your experience as a professor influence the way you work?

Always, although I try to keep my teaching voice on mute when I work. The painting should be a step ahead of what I’m able to communicate through teaching.
Posted by Alison Hiltner at 10:13 AM No comments:

1. What experiences of collective vulnerability happens from the mobile stage installation in the exhibit?
The installation deals with how perceptual tools shape the world as it appears to us, individually and collectively. These tools are: sight as it picks apart imagery and the cognitive process of recognition, the subjective nature of taste, as in the "sour" grapefruit juice, language's ability to enable understanding and dislodge it through communication and through the text-video component of the installation, the exhibition platform/stage I've created and the dissolution of the third-wall which takes place when the viewer and performer discuss their individual sensations while drinking the juice.


Through these various constructed modes each of us formulate our own understanding of the world. The installation asks us to individually shed these filtering and cognitive processes and arrive at a state where shared understanding necessitates shared vulnerability.


2. What is the role/significance of the grapefruit in your performance? Why is the interaction with the audience important in this work?
I have found that grapefruits and grapefruit juice are some of the most contentious fruits/juices. On the friendlier end of the spectrum they've been deemed an "acquired taste" but other opinions are far more vitriolic. Ultimately, the contention lies in the fact that they are sour, an unorthodoxly appealing flavor. Sour is experienced in a purely subjective fashion and to try and convey sour as a quantifiable measure is pure conjecture and futile, similar to a doctor's pain-scale. Individuals discussing the nature of the flavor they're experiencing will never know whether they are on the same page or ships passing in the night. At best, they can only hope for a shared understanding that they will never truly comprehend the other and arrive at a space of restless empathy. 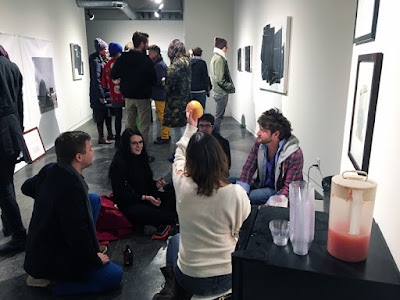 3.There seems to be a connection with the grapefruit and the ‘Honeydew Cantaloupe’ piece. Can you tell me more about this?
Translation is dealt with in both works. Honeydew Cantaloupe employs a similar gesturing at a perfect facsimile or translation but ultimately is only as good as i can do. From the initial purchase of the loose pile of scrap to the welded object-pile a lot of information is misplaced, inadvertently altered, approximated, or left out completely. I attempted perfection by trying to recreate the original using documentation but ultimately fell short. The final translation lies in the art object's reentering the scrapyard and he flow of materials. It goes from trash to art back to trash and all that's left is the photographic trace which neither lies nor purports to tell the truth gaining, losing, and gaining value again during the process.

4.Can you tell me more about the film Resurrecting Revolt that will be screened during the exhibition?
There isn't a film. I never made one. Just the photos.


The project was very cinematic in nature as it exhumed a vital historical moment, a moment when groups of dispossessed Indigenous peoples, including members of the Cupeno Indians, rose up to assert their Native rights. The moment has been omitted from most mainstream historical narratives including its absence at the National Park in which it took place. The project was an attempt to resuscitate this effort and the leader of the Cupeno Indians, Chief Antonio Garra's brave and poetic attempt to assert his people's rights while ameliorating guilt, guilt that he positioned, humbly, as a human condition. He was killed, directly after speaking the phrase included in the project, by the American invaders.

5.How is the sense of humor and play vital to your work? Is it always deliberate?
Humor and play directly influence how I formulate, conceptualize, and realize projects. I think of these tactics less as having a good time with the work and more so as vital survival and adaptive strategies for thinking about the world in a less linear fashion. Questions, which play, humor, and chance exercise, flex and bend customary thinking, normative behaviors, and cultural standards. This is art's role for me.
6.How do you come up with inspiration/ideas/concepts for your work?
I have a site-sensitive, site-responsive approach and I think about site in a very expansive sense. A site is a physical place, a site is an idea, a site is a body, a site is a historical moment.

7.What does your studio look like? What is your studio routine?
It's a disaster and so am I. I have no routine. I work when I feel compelled to, which is usually all the time, but mostly in my head.
8.What are some distractions in your studio?
Everything, but mostly love. Also, the longer I consider myself an artist the less I seem to be interested in a studio practice. I wouldn't call myself a post-studio artist but I do draw most energies and ideas from existing in a world that is external to the rarified space of the studio.

9.When do you consider work finished? Is there a planned outcome?
I like to think of everything I do or think as provisional, as unfinished. Or maybe more accurately, as unfinished but resolved.
10.Has the interplay between your work and Tim Tozer’s painting affected how you view your work? What do you think of this juxtaposition?
I'm not sure that it has affected how I produce my work but definitely for possibilities in how I think about it. I think the union of the two disparate bodies of work, Tim and mine, sets up a very interesting dialogue about space, frameworks for relationships, and provisional imagery that allows meaning to develop and grow.

11.Does your experience as a professor influence the way you work?
Absolutely. I entered academia thinking very seriously about how to shirk a lot of the baggage that academic spaces are saddled with; institutionalized critique, stylistic trends, market influence and maybe more importantly, authority and university hierarchies. I try and approach the classroom as a space of exchange, challenging my position as professor of ideas, opting instead for facilitation, question formulator, tool-giver, inspiration, and enabler.

Posted by Alison Hiltner at 10:27 AM No comments: