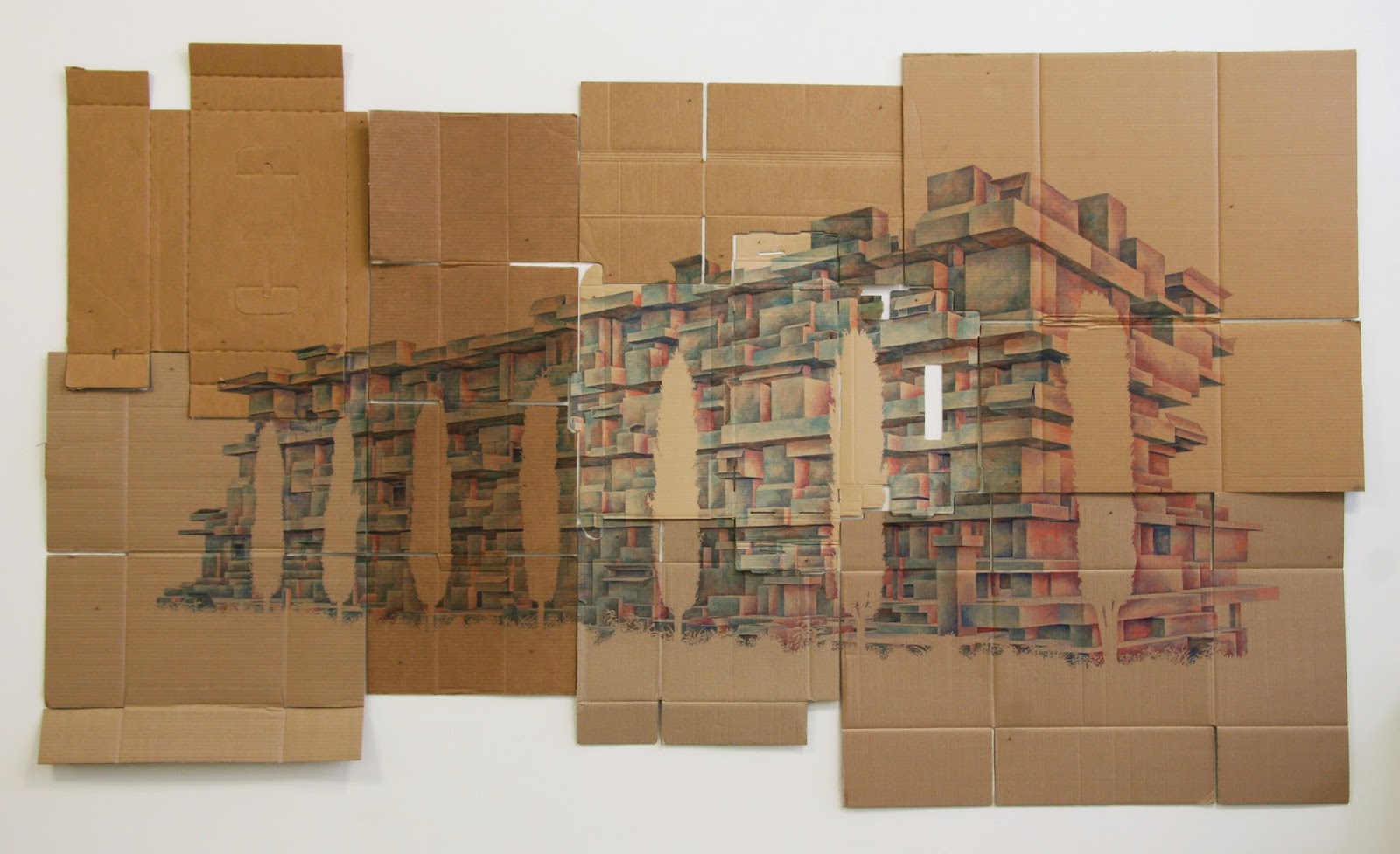 You have successfully painted on many unexpected and intriguing surfaces like Styrofoam, ceiling tiles, and felt, have there been any materials you were excited to paint on but were unsuccessful?

Hmmm, I’d have to think about that a while. The choice of materials and the imagery depicted are almost always linked. For example, interior architectural cutaway views made of joint compound on drywall, which are the basic materials of interior walls, or the manipulated natural forms of topiaries depicted on the manipulated natural forms of plywood. So if there’s a connection between a material and particular imagery that I’m interested in, I will find a way to force them together! 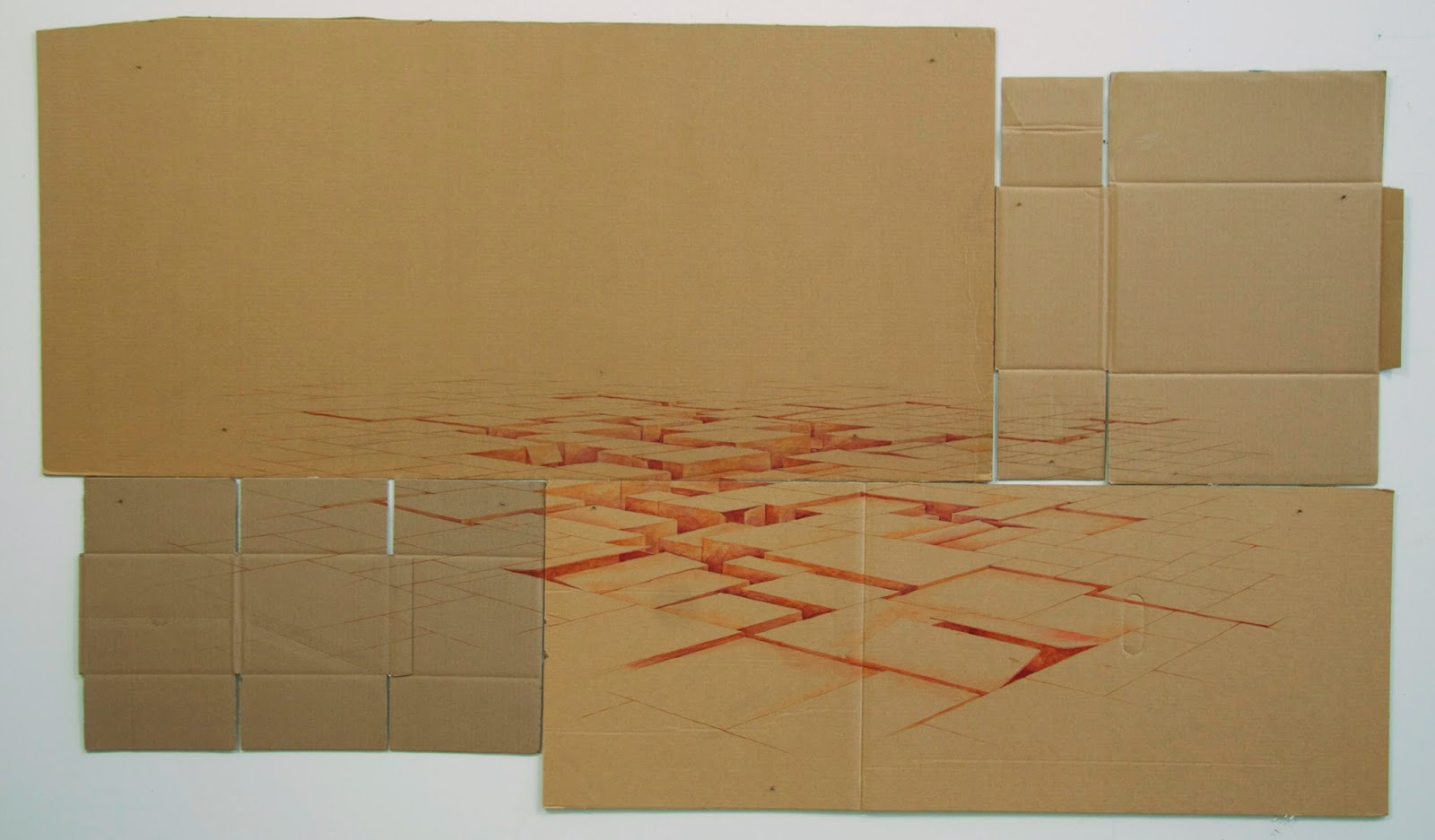 What was your “gateway” material so to speak that led to painting on non-traditional surfaces?

Wood is not exactly a non-traditional material, but the way I used it for some earlier work drew attention to particular standardized forms that it comes in, I’m thinking specifically of panoramic landscape paintings about resource use on 2X4’s. That was the first series that emphasized a link between image and object.

Why did you start painting on cardboard? Is there a moment that sticks out in your mind of the experience? What were you thinking and how did it feel to apply paint to that surface?

I first used cardboard to create artificial tree stumps. On one giant one I added painted tree rings. From there I thought about potential other ways to address cardboard’s physical properties and the ubiquity of the material as a standard container for global mercantile exchange, and the work in Austerity Plans presents several different avenues suggested by that line of inquiry.

I noticed that your watercolors are almost centrally located on a large piece of cardboard while your acrylic paintings cover their entire surface. Is there a correlation between the paint and the scale or coverage?

First, just for clarification, most of my paintings are in oil. I have usually created compositions on cardboard that emphasize an isolated ‘figure’ on an empty ground. They lend themselves to that specimen-like format- there’s a no-nonsense assertion of fact that I like – it helps legitimize these otherwise impossible structures. However, some of the newer pieces in this show fill the whole space or are cropped in ways that activate the ground more. 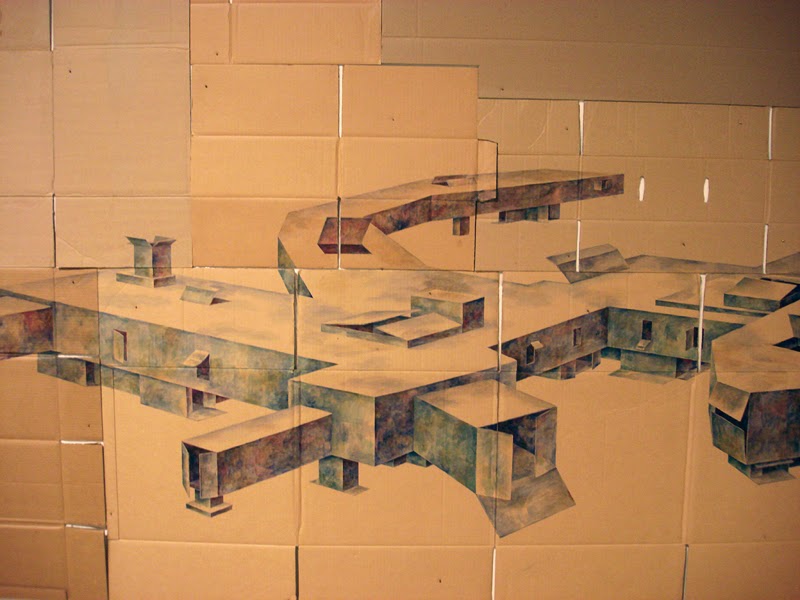 What is your first art related childhood memory?


It was more like high school than childhood, but I remember loving work that expressed diametrically opposite attitudes about what art is. I responded both to Realist painting like Thomas Eakins, which demonstrated attentiveness to the external world and the craft of illusionism, and Marcel Duchamp’s Fountain, which overtly challenged those assumptions in an audacious and hilarious way. I’ve been embracing that tension ever since.

Do you listen to anything while working?

Sometimes I need quiet to concentrate on working out ideas, but a lot of my work involves relatively rote, somewhat repetitive activity, and then I’ll usually put my i-tunes library on shuffle- I love the surprise of an eclectic, sometimes jarring mix- like Thelonious Monk followed by the Monkees, followed by chanting Benedictine Monks….

Acrylic paint seems to conceal the material you are painting on while with watercolor the paint becomes apart of the surface instead of lying on top. Why do you choose certain paint for a particular surface?

I like watercolor for the cardboard work because its translucency does always bring a viewer back to the materiality of the corrugated boxes that make up the surface. 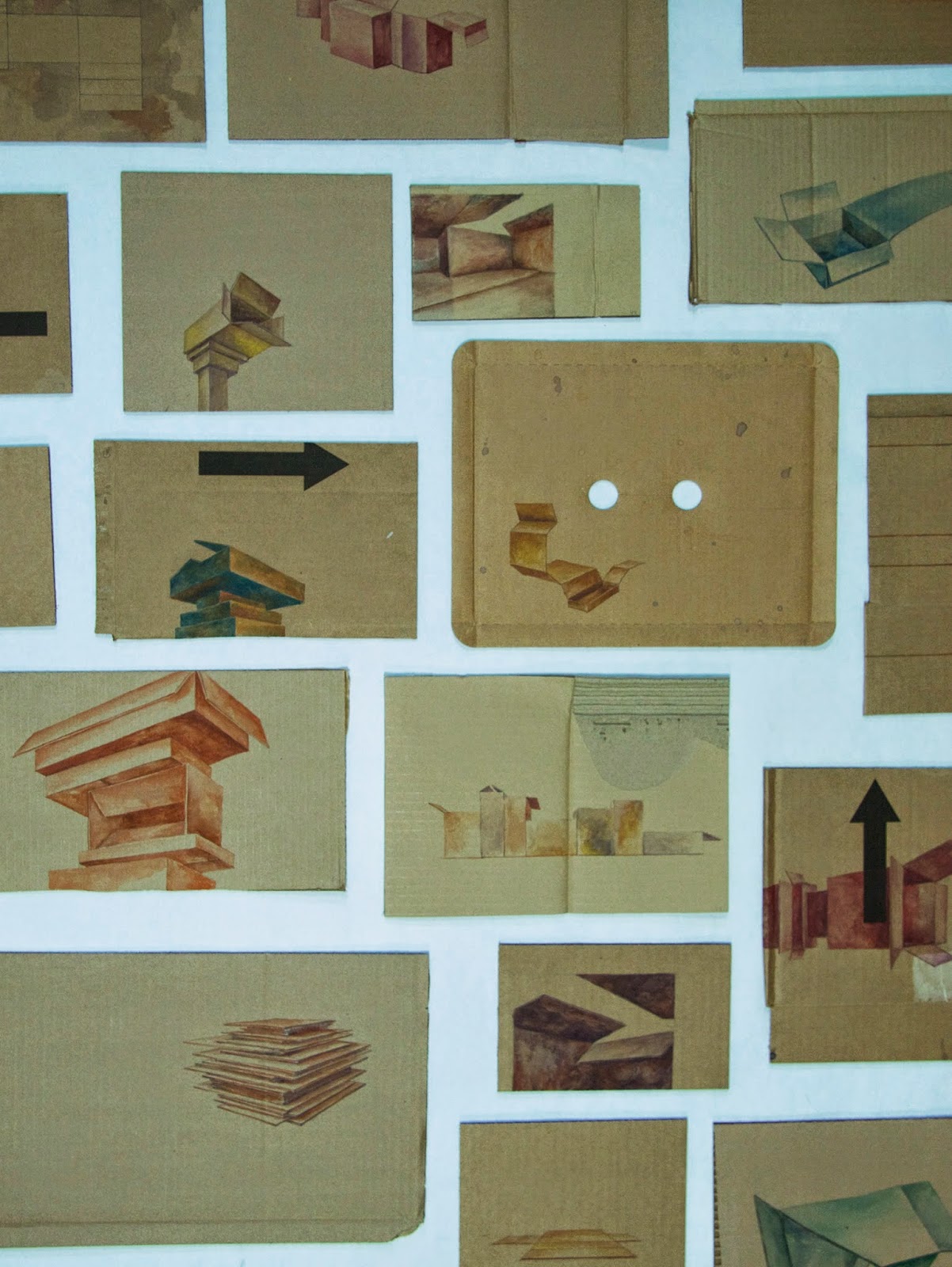 After looking up the definitions I found austere can mean severe or a simple plain quality and austerity can refer to spending money only on things that are necessary. Does Austerity Plans reference the economic use of painting on something that most people throw away and in the clean and detailed architecture demonstrate a blue print or plan for doing this?

I like the multiple references that ‘Austeriy Plans’ brings to mind- so the answer to your either/or question is yes. I like that austerity can refer to a simplification- a Modernist, even Minimalist assertion of attention to the elemental, the basic. Some great art has come into being from that premise, but it’s a narrative that can only go so far- an end game. In economics, it implies hardship- government policies that slash services, usually at the expense of those lowest on the economic ladder. I’m interested in suggesting alternative ways to consider the term that reframe it to emphasize doing more with less- to develop a spirit of radical resourcefulness. Modernism and Global capital both rely on an assumption that progress and growth are synonymous and inevitable without much consideration of the costs. I propose rethinking what we mean when we talk about progress. So do paintings of boxes on cardboard boxes accomplish this? I don’t know- think of the work as a catalyst for this kind of conversation.

Austerity Plans runs from April 5 to May 15 at SooVAC with an opening reception on April 5th.  Visit Here for more on David Lefkowitz.

Posted by Alison Hiltner at 3:14 PM No comments: